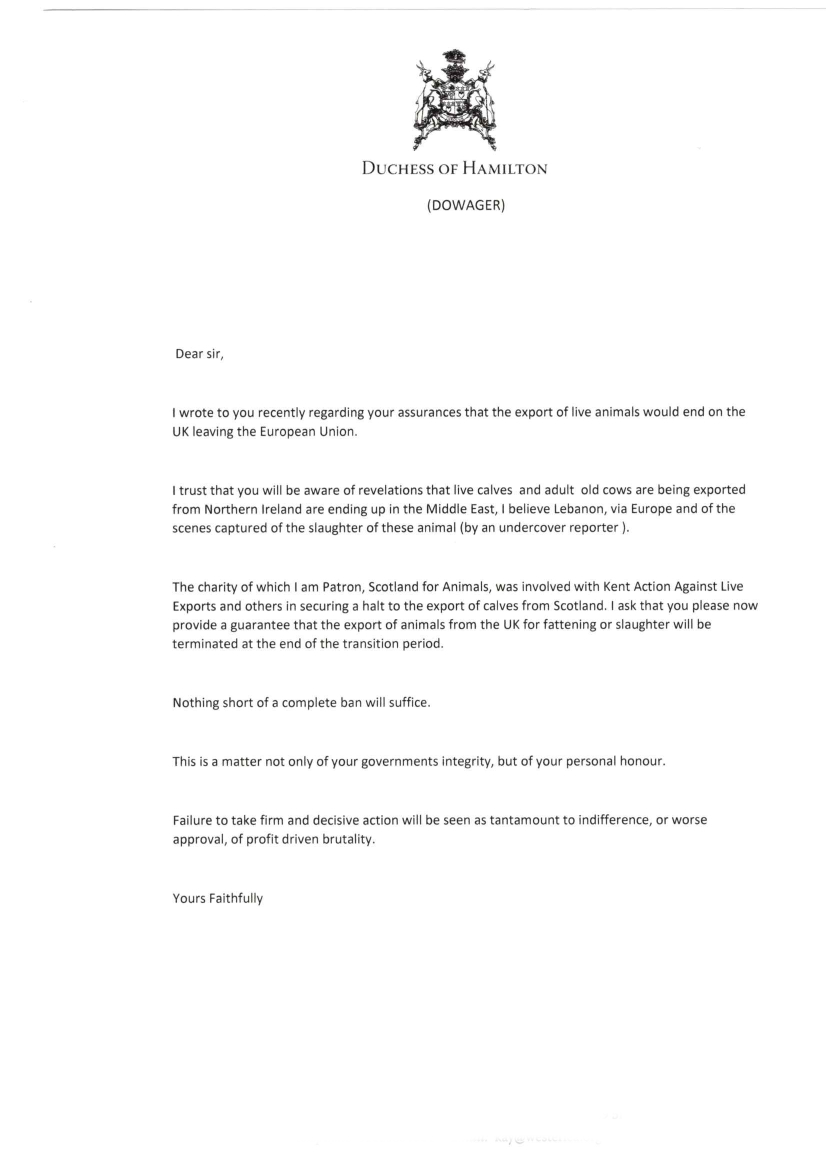 The export of live calves from Scotland has ended

To all our supporters who have worked hard to help achieve this, thank you. Never underestimate the power you have.

Although this ban has been achieved, we must all keep in mind that other animals are still being exported from the UK in miserable conditions, to a brutal death.

We will continue to stand shoulder to shoulder with our friends at KAALE and others until this trade is finished.

Please see below statement from Kent Action Against Live Exports.

1. We would like to thank TAALE for originally corresponding with DERA Ireland and obtaining the information that the original journeys from Scotland via Northern Ireland, Southern Ireland and down to Cherbourg in France were very border line/illegal on the timings for calf journey’s.
2. Eyes on Animals and their UK representative who investigated some of these journey’s.
3. BBC Scotland who carried on with the investigation forcing P&O to decide to stop carrying the calves from Cairnryan to Northern Ireland resulting in the calves coming to us at Ramsgate for the Joline in October 2018.
4. All KAALE monitors and supporters who have turned out in all weathers to gather the information required to prove that the calf transporters were breaking the laws relating to calf transportation timings. Without these people non of this would have come to light and we personally are so grateful to these people for their faith in us and what we are doing.
5. Our dear friends in Scotland for Animals who have also worked with us since the end of 2018 being our liaison with the Scottish government. They too have been there every time the animals needed them and have never stopped pressing for this ban.
6. Our representative who travelled to Scotland to meet the Scottish government’s official dealing with calf exports, all arranged by Scotland for animals, at the beginning of this year. From this meeting there have been no calf exports through Ramsgate because the evidence we have produced showed they were breaking the law.
7. The Scottish government for making a stand on this issue and deciding to ban this trade even before a decision by Westminster.
8. CIWF for taking all the evidence forward and pressing for a judicial review which has resulted in this decision.
9. And finally P&O who banned the trade in 1994 and when ever we get evidence of the exporters trying to slip through on their ships immediately act to stop it.
We believe this has been a tremendous joint effort with a victory we all deserve.
THANK YOU ALL
Yvonne   KAALE   Kent Action Against Live Exports.“

When Abbott was in office, he visited Indonesia in person to issue a grovelling apology for the previous administration suspending cattle exports after footage emerged of brutal cruelty to animals shipped to the country.

Instead of being horrified by the suffering, Abbott announced that he was horrified by action taken to end it.

“I support the live export trade – I always have and I always will.”

“If a particular market wants live animals, why shouldn’t we supply it?”

You can see some of the footage here; https://www.youtube.com/watch?v=czy2ffzTA3E

We’re pushing government to bring forward legislation to ban the UK trade. Abbott’s appointment is another indication of this and other administrations’ lack of principle, and it’s intention to stand full square behind the ones profiting from misery.

We need all of you to stand with us.

The Environment, Climate Change and Land Reform Committee met on May 26th to agree amendments to Animals and Wildlife (Penalties, Protections and Powers) (Scotland) Bill.

Apart from some admirable proposals, such as extending protections to animals such as octopodes, crabs and lobsters (Colin Smyth), lawmakers are missing the point completely.

The flaw running through the whole structure is welfare legislation is often not enforced in the first place.

It can be extremely difficult to get Police Scotland to accept the reporting of an offence, and if they do, often no action is taken.

If action is taken there’s no assurance that Procurators Fiscal will pursue a prosecution. If they do, most offenders walk from court either simply admonished, or with a limited “ban” which almost certainly will not be monitored.

This is the fundamental issue. If law isn’t even enforced, the legislation’s effectively useless.

What our politicians plans amount to is the suggestion that if you fit a brand new exhaust to a car with no engine, it’ll make it go faster.

Stage 3 is next, and this is the last chance we’ll have to actually make effective change to the Bill.

Please take a couple of minutes to contact your MSPs and ask that they commit to supporting Scotland for Animals five points for change;

Your voice can make the difference.

Since Coronavirus outbreak was deemed a national emergency, those involved in the slaughter and butchering of animals have been officially designated “Critical Workers”.

“Essential” to the functioning of society.

In the same category as nurses, midwives, paramedics, doctors.

Since Coronavirus regulations were announced, we haven’t stopped working for Scotland’s animals.

Although we’ve put in place measures to make sure we continue to be there for them, one part of our work that has been affected is our street campaigning and outreach events.

We intend to get back out and into our communities as soon as it’s safe to do so. If you want to join us please message, or email sarah@scotlandforanimals.org, and we’ll keep you in the loop.

Stay positive, we’ll all get through this together.

*Incidents of animal cruelty look to be increasing through lockdown. If you suspect it, report it*