This is the law that ‘banned’ fox hunting. If you want an example of grandstanding, but effectively unworkable legislation you need look no further.

Some of the MSPs who let this shambles slip through are still in the chamber. Please get it right this time.

Good to see some other Scottish animal organisations catching up with SfA and finally bringing themselves to support legislation for mandatory abattoir CCTV.

It only took you how many years? Amazing how quickly some jump the wall when they see the wind changing direction.

Don’t worry, we and the rest of the public have already handled all the hard graft. Better late than never though.

The number of animals slaughtered without stunning has seen a massive rise.

Scotland for Animals continues to lead the campaign to expose and end this scandal. We warned many years ago that unstunned slaughter was becoming one of the biggest welfare issues of our time but other organisations seem reluctant, to say the least, to tackle the issue.

Now, before it’s too late.

New report compiled by researchers from ETH Zürich, Princeton and the University of Cambridge expects use of antibiotics in animal farming to rise by another 52% by 2030.

“Globally, animals receive almost three times as many antibiotics than people, although much of this use is not medically necessary, and many new strains of antibiotic-resistant infections are now common in people after originating in our livestock”

“As global demand for meat grows and agriculture continues to transition from extensive farming and smallholdings to more intensive practices, the use of antimicrobials in food production will increasingly threaten the efficacy of these life-saving drugs.”

If you had any doubts the UK meat industry’s out of control here’s more miserable news.

This is an example of why Scotland for Animals campaigns not only for mandatory abattoir CCTV but for any monitoring to include bodies independent of food operators and authorities.

An almost unbelievable display of hypocrisy through week as Richard Lochhead MSP was spotted outside Holyrood joining campaigners calling for tougher sentencing for animal cruelty.

Throughout his many years as Cabinet Secretary for Rural Affairs, Food and Environment Lochhead consistently blocked attempts to improve welfare in the meat industry from abattoir CCTV to a ban on unstunned slaughter. We shudder to think the suffering this character and his cohorts have enabled as a result.

This is either a crisis of conscience or rank opportunism. Knowing Lochhead’s record we would suggest it’s the latter.

Please don’t be sucked in by these con-artists.

We had a good morning outside Parliament on 21st, standing up against the proposals to build a new greyhound race track. Well done to the organisers. It’s still not too late to sign the petition here. 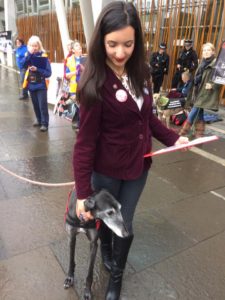 Disgusted by fur, but still buy leather? It’s just as cruel. Over a billion animals are killed by the leather industry every year, including dogs and cats – there’s no way to know what animal you are wearing, not that it should matter! The poor cows are forced to march for days to their death, and have chilli’s rubbed into their eyes to keep them moving when they collapse, or their tails snapped…

It’s also disastrous for the environment, with leather tanneries releasing toxic chemicals into our atmosphere and causing life threatening illnesses to the poor worker who must earn a living there.

No one should be impressed by ‘real leather’ labels.

Please ditch leather, there are so many wonderful alternatives available, made from eco friendly and durable materials.

Scotland for Animals welcomes the Scottish Government announcement yesterday that some areas of welfare provision are to be reviewed.

We also welcome the inclusion of a ban on the use of wild animals in circuses, however we are disappointed that this will have a very limited protective impact due to it’s scope.

We are further concerned that there is no mention of improvements regarding legislation concerning the farming and slaughter of animals, which by it’s nature and the sheer number of animals involved, presents arguably the largest welfare issue.

We are particularly surprised that given the huge amount of public support for mandatory, independently monitored CCTV in abattoirs and an end to unstunned slaughter these measures have been ignored.

Not least due to SfA’s campaign for proper enforcement and tougher sentencing with regards to animal cruelty we are heartened that the Scottish Government has at long last pledged to review sentencing.

In light of previous betrayals we hope that this is not yet another round of soft measures and empty promises. There is history of government championing relatively easy wins to gain public approval without the risk of taking on the meat industry or investing hard work in creating a proper legal framework for ending everyday cruelty.

We will be holding Ministers to account on all of these claims and pressing for the inclusion of meaningful, far reaching changes which are at present not on the table.

Photographed by a Scotland for Animals member at Zippos, Glasgow Green yesterday. Cats in compartments in a trailer.

The big felines are away but the small ones are taking their place. In a campaigning environment when tough battles are too much hard work some animals are more equal than others.

When you hear the welfare groups and politicians smugly announcing that they’ve won on circuses remember this picture.