SfA stalwart layla was taking a well deserved break in the sun earlier, followed by a good auld chill on her cool mat.

If you come across any animal struggling in the heat, please stop and do anything necessary to help. 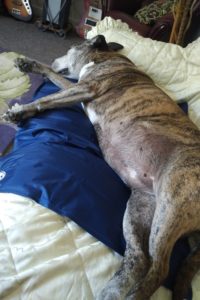 We notice there has been a volley of questions at Holyrood on the coat tails of Monday night’s BBC Scotland piece on greyhound racing.

We’ve always been sceptical, to say the least, about the motives behind these parliamentary questions. We certainly don’t believe that they’re fuelled by a burning desire to right a wrong.

The pantomime is usually acted out something like this;

“Parliament understands that the situation regarding the use of (insert species) in (insert circumstances) is unacceptable (insert a few examples)/ To ask the Scottish Government what it is doing about (insert subject)”.

The answer is more often than not along the lines of “The Scottish Government doesn’t give two ….. . Next”

We’re going to give these people a nugget of information so no more time’s wasted; Government doesn’t care. If they did you wouldn’t be asking the question.

But we think they already know that.

This showboating is usually deployed by politicians who were in with the bricks. They’ve been there long enough to have made sure something was done before now. If they really wanted to.

We’ll be charitable for a minute. Let’s say, on the other hand, they believe that they’re trying their very best but are genuinely powerless to stop cruelty and abuse in the face of the machinery of state.

If this is the case then they should leave the building pulling it, metaphorically, down behind them, and fight for justice on the ground.

Either that or do the right thing, and move aside for people with a real fight in them.

That 63 grand plus everything else you can get your hands on, and that wee sense of power, is maybe far too appetising for some to let principle get in the way.

There will be (few, mind) politicians in there who deep down want it to end. But taking a back seat to stay in the career game isn’t good enough.

Get on your feet, get them told, and don’t let go until they’re beaten. Both you and the victims will feel the better for it.

Taking into account the almost incomprehensible horror they endure every day the length and breadth of our country animals don’t need patter, they need a revolution.

A better tomorrow can’t be won unless together we resolve to not only remove those responsible for the suffering, but also those in power who enable them.

Photo courtesy of Ayrshire Animal Save

The MSPs in the Scottish Parliament Cross Party Group on Animal Welfare know.

What’s it going to take for the law to be applied, and these dogs to be protected?

Thank you to the people (and dogs) of Glasgow’s Parkhead for their support during our demo at David Linden MP’s surgery yesterday.

Linden’s a big supporter of live exports and has spoken on behalf of the SNP against any ban.

Scotland for Animals’ Spokesman John Patrick discussed the issue with him outside. After detailing the flaws and errors in the MPs position and statements, and linden apparently accepting these, John asked him directly if he would now drop his opposition to a ban on live exports.

This goes to the heart of everything that’s wrong with the political class and those who are supposed to represent us. It seems principle and moral mettle is readily heaved out the window in favour of career and party.

Regardless of party affiliation or none, every one of them need to be exposed and held accountable.

Keep your MPs replies coming, and let us know if you want to plan a demo in your area.

Standing side by side with our friends at Say No To Greyhound Racing In Scotland at their protest today.

Last night, another lorry full of Scottish calves sailed from Ramsgate and into the misery of the veal system.

Babies stolen from their mammies. All for a few quid.

Get in touch with us if you want to help bring this scandal to an end.

The farmers, the hauliers and the Scottish MPs who are fighting a ban. You should be hanging your heads in shame.

Tomorrow, 6pm, another shipment of calves from Scotland will be leaving Ramsgate, and on into the veal system.

Contact Stop Live Exports From The Port of Ramsgate if you can attend demo’s at the port.

If you want to take on the politicians and vested interests keeping the Scottish end of this loathsome trade going, let us know.

These weans can’t fight back, but we can.

We’ll be there this Saturday (18th) to support Say No To Greyhound Racing In Scotland.

Get in touch with them on Facebook; @saynotowallyfordtrack for location details.